This time share your thoughts on the past few days' events in Mumbai. Write a letter to anyone - go anonymous if you wish - and send it to me at ammania@gmail.com

Your letters will be published at Lost in Post.

Anyone who has ever been to the city has a story to tell. An aunt who visited Mumbai just once sometime in the 80s, still talks about how her two word Hindi vocabulary of 'aage' (straight/further) and 'oopar' (up) quickly dwindled to just one during an autorickshaw ride. And how it left her directing the driver to go up-up-up to her sister's house.

An aunt-in-law who visited us when we were there couldn't understand how they managed to build the buildings so tall and conceal all the wiring inside the walls.

My mother still recalls the time she shopped for vaazha-thandu in Matunga for varalakshmi nonbu one year. And how she brought it all back to Andheri alongside fisherwomen with their baskets of the day's catch.

I have a sister who is living there and one day some years ago, she lost the keys to her apartment. It was fairly late in the night and she went straight to the first policeman she saw to ask for help. Together they combed the suburb for a locksmith and when they found one, an hour or so later, they brought him back to help her open the door. When she offered to reimburse the kind policeman for his time, he refused her offer and said that he had only helped a 'sister' and how could he accept money in return?

I lived there for a few years. And have my share of Mumbai stories. Tonight I remember every one of them. It's like remembering all the good times when a favourite aunt passes away. Somehow, the second time around the jokes seem funnier. And tears more poignant. May be because you know that what is gone is gone forever.

I read this post with mounting anger. I wish to do something - don't know what though. I want to act quickly before my anger turns cold. What can I do to help? 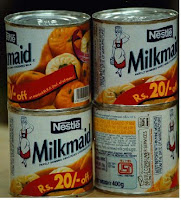 There are few things that taste as good in real life as they do in nostalgia. Reminiscing about food somehow has the strange effect of cancelling out such pointless concerns as calorie counts and hygiene issues that often plague real life savouring experiences. However, there are a couple of exceptions that almost always taste as good in real life as they do when dreaming about them in the middle of a Wednesday afternoon budget presentation. One of them is masal vadai. There has never been an occasion when the experience of sinking my teeth into one has been anything other than exceptionally joyous. The second exception to this rule is condensed milk. Or to give it its brand-turned-generic name – Milkmaid.

Growing up, we rarely had any tinned food. Milkmaid was perhaps the only ingredient that came in a tin. And the opening of one such tin was a ceremony deserving of its own Olympics. First, there would be a crowbar with large piece of smooth stone on one end and a stubborn tin on the other. The stone would pound away leaving several craters on the tin lid. Then a knife would be procured in an attempt to pry it open. And after much wrestling, the tin – now sadly resembling a teenager’s acne-ridden skin – would be leaking its sticky sweet condensed milk. A dash would be made to gather its nectar in a bowl before it fell to the ground and was wasted. Finally, the tin would be held upside down for a very long time – sometimes hours even – so that every last drop of its contents was harvested. This inaugural drama would only make Milkmaid – like its eponymous maid who plays hard-to-get - even more desirable.

Anyone who has ever had a slim thread of condensed milk poured onto their palms from a heavily pierced tin of Milkmaid would know exactly in their heart what heaven tastes like. It is liquid bliss. And as a child, I would yearn months and months for this all-too-rare treat. Although Milkmaid was an essential ingredient in payasam, it would have to be a very special occasion for the payasam to earn its Milkmaid. With the result that it would sometime be just once-a-year that I could have it piled onto my palm and lick it clean before it slithered down my elbow. And there was never enough of it. And what will we add to the payasam? would be the constant retort whenever I asked for more.

Why payasam when milkmaid would have done admirably well on its own as a sweet? I’ve often wondered. And it remains a mystery to-date. Wouldn’t serving us cups of milkmaid done the job just as beautifully? What was the need to cook it and distress it out of shape? So much so that there would rarely be any trace of Milkmaid’s original rich, gooey sweetness in the payasam I would get to eat afterwards. There would be far too many things vying for my attention – wispy cardamom and saintly saffron among others demanding my consideration. That the pale Milkmaid, the lifeblood of this creation, the matriarch of this dish would sadly go unacknowledged, forgotten.

And so to redress years of injustice, this Deepavali, I served up something special. Something pure, something raw. Little thimbles of paradise. Milkmaid. Nothing added, nothing taken away. Cynics would suggest that I was just plain lazy to dress it up as a halwa or a kheer. But what do they know? They can go to hell. Me? I’ve tasted heaven.
at November 09, 2008 26 comments:

Shop in the time of credit crunch

Who are all these people, you wonder one day as you sit in a café sipping a warm mug of hot chocolate and watching pedestrians on the road. Why are they walking around with pendulous shopping bags? you ponder. What is inside those bags? It is not summer and it is months before Christmas. And if newspapers are to be believed, we are in the middle of a credit-crunch (you, like most others don’t wish to be bothered by the economic-minutiae but generally assume that it means tighter purse strings). Which brings you back to your question - who are all these shoppers?

You sip your tepid chocolate. Perhaps this woman here is celebrating the 5th anniversary of her graduation and has decided to gift herself a unicycle which is now flat-packed and she has to assemble it all herself. Perhaps that man over there has suddenly felt the urge to spend a ridiculous amount of money on vast quantities of shower gel and enamel paint. May be this young lady here has just found out that her account has been wrongly credited with a fortune and wants to blow it all up on vitamin supplements and hot-cross buns.

You take another sip of your room-temperature chocolate. Perhaps it is none of these. Perhaps there is a perfectly good explanation for shoppers being out on a Tuesday afternoon. But you’ll never find out what it is. It’s nearly time for you to go back to work and your drink has gone cold.
at November 03, 2008 3 comments: