What Use Is Knowing...

...anything if no one is around
to watch you know it? 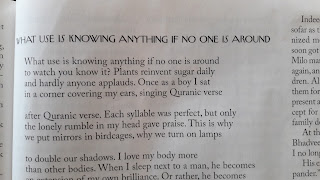 These are the opening lines of an eponymous poem by Kaveh Akhbar that I came across in The New Yorker recently. I am increasingly given to believe that people and words come to you bearing insights at a time when you were meant to read them. That it would be foolhardy to dismiss them as mere coincidences.

I read the above lines a couple of hours after an exchange on Watsapp which had caused me to wonder if perhaps I should not be giving away so much of what's going on. I began to question if the importance of the event is any less if it is not shared with others or liked by others. Is an event only valid if has been seen by others?

There was something about the culture of oversharing that made me pull out of Facebook some years ago. A decision I have not had cause to review ever since. And yet, it was precisely the kind of 'look at what's going on' that I was indulging in recently.

It was also what made me stop in my tracks to wonder if, I was taking part in whatever it is that I was doing - attending concerts, running races, visiting places - so I can share it with others? And did it matter at all if I didn't do so? Would I still be doing all the things that I was doing if there wasn't an audience? Most likely, but would they matter as much?

As for the poem itself, I couldn't follow much beyond the second stanza. It seemed like broken up and disjointed sentences which may have retained some coherence if had been written in a paragraph as running prose. But then I don't understand such obtuse poetry and I am left wondering if I should have shared with you the fact that I read the New Yorker or that some poetry leaves me confused. I will go now.