Let's crank this up a bit, shall we? 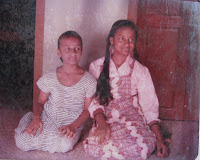 Earlier I'd asked you to send me your letters to your teenage self and I've received some of the most wonderfully interesting responses. All of which may be read here.

I wish to make it a bit more interesting. I'd like to turn this into a competition.

Write the most compelling letter to your adolescent self and send it to me at ammania@gmail.com by the end of the month. My favourite letter will win a prize (which is yet to be decided). You could even send a picture of yourself as a teen, if you like. Or go anonymous, if you would rather.

Either way, get writing and I look forward to your letters. Thank you!

I just had a crazy idea. There's this novice triathlon to be held on the 4th of July. To complete the event, I need to swim 200m, bike 5km and run 2.5km. I've done all of these before. Only not one after the other.

But I need to do this for some reason other pure, personal motives. And I'm thinking of Projectwhy on this occasion.

A while ago Stephen Fry wrote a letter to his teenage self in G2. It was a wonderfully reflective piece, typically Fry-esque. It got me thinking. If you could talk to your teen self what would you tell her? Send your thoughts in a mail to ammania@gmail.com . Mention 'If I knew then what I know now' in the subject line. All letters will be posted in Lost in Post

It was Sundar who first spotted them. Tiny black dots scurrying around in a frenzy on the kitchen floor. He blinked rapidly mistaking them for little squiggles that often swam before his eyes when they hadn't yet fully adjusted to the bright morning light. It was only when he got down on his hands and knees to inspect the purposefully moving dots that he realised what they were. He instinctively squashed a couple of ants under this thumb before he remembered how as a young boy, his grandmother would smack him on the back of his palm and tell him off for killing harmless insects. She would tell him how in his next birth, he would be born an ant and be crushed to death by a little boy. Sundar could not understand how he could come back as an ant when only two days ago she had warned him that he'd be born a sparrow who'd be stoned to death by a lad "just like him" But he never asked her about it because if he had, he'd get a clip around the ears and be told to stop being so 'wise'.

Sundar's mother however, had a different reasoning behind the ants' appearance. Whenever she spotted ant clusters around the house, she would be convinced that she had forgotten to honour one of her promises to the gods. And the ants were there to remind her of that. No crisis - however minor or major - around the household went without an appeal from Amma to her favourite god to resolve it. Like the time when Sundar came down with chicken pox two weeks before his board exams. And Amma stood in front of the framed picture of Pillayar which hung on their living room wall, with her palms folded and eyes closed. She made a deal with the Lord. You cure him and I will break a hundred coconuts in your temple by Friday. Or the time when Appa lost keys to the locker which had all their jewellery. A dozen coconuts promised. And eleven coconuts were cracked every Tuesday until Sundar's sister Sharadha's wedding was finalised - which took 62 weeks from start to finish, which made the local coconut vendor a very happy man. Once the ants had been sighted, Amma would do a quick inventory of the recent events to see if there had been any mishap. Even if she couldn't recall any dealings with the Lord, she would break a coconut anyway at the temple that very evening. It could be something that's completely slipped my mind, she would reason, why tempt fate? After all, it's just a coconut.

Sundar looked down at the ants crawling furiously over a spot of jam on the floor. He followed their trail all the way to the door. They'd built a nest in a corner of the doorway and were scurrying food back and forth. He couldn't just let them be. Janice would freak out if she came down and saw her kitchen invaded by an army of ants. Once when he'd picked up a piece of cake that he'd dropped on the ground, she'd been outraged. Do you know what kind of germs you could be tucking into right this very minute? she'd asked horrified as he chewed on it. Whatever it is, he'd replied between bites, it's quite delicious. He was then treated to a full list of illnesses he could contract if he continued with this rather despicable practice.

Sundar had to do something quick before she came down and created a scene. Wasn't salt supposed to act as a repellent? Or was it for snails? May be he should try sprinkling pepper on the nest. Perhaps vinegar would do the trick. Somehow he felt he was getting his household tips mixed up with recipe for a salad dressing. He was busy rummaging the cupboard that he barely noticed his wife standing behind him in silent horror. Don't worry, I'll have it sorted, he told her as he put his arms around her shoulder and gently led her away from the crime scene.

The temple was not on his way home. And he was not even sure if they would let him break coconuts inside. But when he told the Panditji that it was a thanks offering to the gods for helping him close a very important deal at work, the Panditji agreed. Sundar found a smooth piece of rock in the garden behind the temple and split the coconut in two in a single knock against the rock. He thrust a £5 note into the Panditji's hand, tucked the two halves of the coconuts into a plastic bag and felt absurdly happy driving home that evening.

Just one spray and the buggers are gone, announced Janice triumphantly waving a bottle of insecticide. Looking around Sundar realised that indeed the ants had vanished without a trace. What? he asked her, have they just run away or have they been killed? Killed obviously. So where are all the dead bodies? he wondered aloud, immediately wishing he had rephrased the sentence to make it sound less like a murder mystery. Well, Janice hesitated, may be they've run away somewhere to die. Yeah, he concluded, that explains it. But he wasn't convinced.
at June 15, 2009 No comments:

I have this little sister...

...Lola. She's small and very funny'. That's how Charlie introduces Lola in their eponymous show every evening at 6.45 on Cbeebies. Lauren Child's (an appropriate name for a children's author if there was one!) characters are funny, incisive and really, very ever-so very clever. Here's a little sample of their quirky little world.

On a related note, I have this little sister Blogeswari, who celebrates her birthday tomorrow. Happy birthday, thangachee!
at June 06, 2009 4 comments:

Fruits of my labour 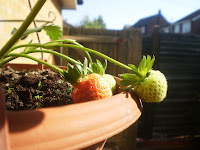 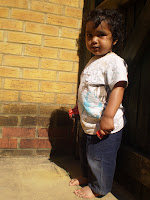