What Has Learning Got To Do With It?

Last week, I decided that I wouldn't write the impending German B2 level exam. Strangely enough, once that decision was taken, I found my bi-weekly German lesson infinitely more bearable, enjoyable even. We had a mock oral exam (mundliche Prufung) a couple days ago and the class was unanimous in its agreement that I had done the best of us all (don't need to be modest here). That's when the penny dropped.

In my anxiety to do well in the exam, I had lost all the excitement around learning the language. I had become so entangled in the myriad grammatical traps that German so eagerly flings at you, that I had failed to recognise the joy that accompanies communicating - even if it is only haltingly - in the language. Instead, I had become so focussed on passing the exam as if it were a box to be ticked and not a tool to be learnt, practised and eventually, gradually and sometimes even painstakingly mastered. I had become blind to the singular sense of victory that follows comprehending a complicated article in a German magazine. I had bought into the whole myth of passing "with flying colours" (a most beloved expression used specifically in the context of passing an exam. I have never known anyone to pass an exam well, or pass it reasonably. It was only every with flying colours as if they were some aircraft that plumed colourful smoke out of its back to mark a very special event). 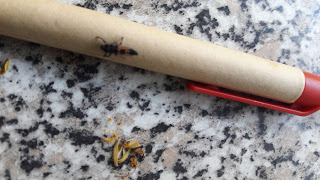 Years ago, when I was studying French, I would be asked repeatedly why I was learning the language. Was it because I wanted to study in France? Would it help my job prospects? Did I want to become a translator? Endless questions wondering about the reasons behind my pursuit. Sometimes it would be that, sometimes it would be this. I would tailor my answer to suit what I thought the questioner wanted to hear. But even back then, I knew with a gnawing feeling that none of this was accurate. Because I had no particular reason why I was learning French other than the fact that it felt good to learn something new.

Not long ago, when a close family member was writing her tenth standard board exams, I watched agonisingly from the wings and winced at how little the schools and their primary preoccupation with getting the children to pass exams had changed since my time. I cited the very wonderful Ken Robinson and talked about how we are killing everything that was wonderful and joyous and creative about our children by subjecting them to this egregious practice called examinations.

In my mind I saw children children lining up on a carousel, all tightly packed with invisible rollers carrying them inevitably towards a levelling machine that would at first, chop the tops off and trims the sides so they looked more like a stack of pencils than a gorgeously disparate gathering of young people. Then the carousel would taken them to a feeding machine with a huge, gaping hole for a mouth and into this, the children would tumble one by one. They would roll and twist around in the machine like they would if there were clothes in a front loading washing machine before finally being ejected out of the other end, into one massive pile. Each child, indistinguishable from the other, their eccentricities and vagaries wiped out to form a uniformly bland creation that slotted straight into a shelf somewhere.

When I shared my nightmare with a friend who had just surrendered her two daughters to this very system and who had both just endured tenth and twelfth standard exams, she rolled her eyes and said that of course, I would say that. After all, I had the luxury of keeping my children away from this system. Not every one had an ivory tower from which to talk from, she remarked.

How had I forgotten so readily the very lessons I preached so passionately to others? How had I let myself believe that somehow passing the exam and securing high marks was more important that learning a skill? And how dare I accuse others of succumbing to the antiquated exam-driven learning system and suggest to them that they seek alternatives for their children, when I had thrown that option right out of the window to seek a certificate in an exam that had no consequence? In an exam whose outcome had little bearing on my life or its course and whose only purpose was for me to then sign up for the next level?

Email ThisBlogThis!Share to TwitterShare to FacebookShare to Pinterest
Labels: German

I am officially giving up on German. It's just too hard a language for me to get my grasp around. It is not intuitive in the same way as French was for me and after trying really hard for almost two years, I think it is prudent to surrender (aufgeben). Now, how do they expect any sane, self-respecting individual to hold in their heads a language with such an utterly incomprehensible set of grammatical rules that it makes groping in the dark in a maze while blind-folded a more sensible option.

Before you wag your finger at me and tell me that I should try harder or put in more effort before I dismiss a language that after all, millions speak and is the national language in all of three countries, let me tell you this. I have passed my B1 in the language with rather high scores and this putting-my-hands-up-in-abject-surrender has been arrived at after multiple and persistent attempts at deciphering the logic behind its grammar and trying to decode a pattern in its rules. But it has eluded me, time and again and therefore with the glee of someone who has managed to free themselves of a yoke around their neck, I hereby announce that I am renouncing all further attempts at understanding and learning German language. I am going to seek solace in Google translate and resort to semaphore wherever necessary.