We've started growing vegetables in the garden - carrots, cabbages, courgettes, tomatoes, cucumbers, marrows, pumpkins, aubergines, cauliflowers, strawberries, peppers, chillis, garlic and leeks. On my window sill sit pots and pots of compost with all kinds of plants that I've been trying to grow. I see a seed on my spice rack and I want to scatter them on a bed of soil and see what happens. I have plunged tamarind seeds into old yogurt pots. Fennel seeds should be sprouting any day soon. Even the old mung bean has not been spared. There wasn't enough for our Sunday sundal. Can't you see, I have only just sown the channa? I demand. 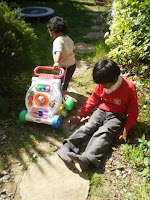 We spent much of our growing years together. Our mothers were sisters and his family lived in the next street. We were almost the same age and went to the same school. I was taller than him but he started shaving long before I did. I introduced him to cigarettes and he would smuggle cold beer bottles to our terrace on warm summer nights. I don’t remember a day when Vaithi did not come by our house. He usually came straight from school and would stay back until late. He was a permanent fixture of my childhood and adolescence.

It must have been sometime after we left school that we started to drift apart. Vaithi went to Vellore to study engineering and I studied at our local arts college. He would come home during holidays but didn’t come by our house as often he used to. He had discovered books and movies and I had started to work at my father’s pharmacy during holidays. During the second year of college his father passed away and his whole family moved to Madras.

These days he lives in America doing something important in computers and I've remained in our hometown. So I was surprised to hear from him the other day. It seems he was here on vacation and wanted to know if he could visit me. “Ada, since when did you start seeking permission to come to our house?”, I told him over the phone.

He had put on weight since I last saw him and had started wearing glasses. “This is where we used to play cricket”, he said pointing the street corner out to his wife. “This is where we would sit and read our books in summer”, he said sliding on to the old swing which groaned under his unfamiliar weight. “And this is where I learnt to ride a bike. Ah, I can't tell you how many mangoes we've had from this tree. Still here…the old tree”, he said patting its trunk like it was an old dog.

“Yes, things don't change much around here'”, I said. Immediately annoyed at how defensive I sounded. “Shall we have lunch?” I asked wanting to change the topic. “Everything has been hygienically prepared. Even the water has been boiled twice and cooled. So you need not worry about an upset stomach. It must be very clean where you live. Not like how it is here...”, I said as we sat down to eat.

“Of course, of course...”, he said a little too quickly. But I noticed that he never touched the water and ate very little of the food. After lunch, our wives went into the kitchen to clear up and we stretched out in the front veranda. We talked about some of our old friends. He told me about his present life. I wanted to ask him a lot about his life abroad. But instead I let him do the talking.

“Do you know what happened to Sharada?”, he asked me eventually. His tone carefully casual. I shrugged my shoulder. It had to come up some time. “She now lives somewhere in Bombay or Delhi”, I said watching his face for any change of expression. “I see her mother at the temple sometimes”. His face did not betray any emotion.
"Married?"
"Hmm…two children, I think. Her husband’s a General Manager or something big in a multinational company."
We both grow silent for a long time.

Sharada was our junior in school. Dark with a slightly crooked nose. She looked a little bit like actress Sumalatha. But really, she just looked like herself. When we were in the 11th standard, Vaithi confessed to me that he wanted to marry her. Apparently, he had proposed to her during lunch period the previous day and she had accepted it. I could hardly believe my ears. For a long time I had set my eyes on Sharada and was going to propose to her myself. The bastard had beat me to it.

I asked him what he intended to do next without appearing to be too curious. It seems they were planning to get married in secret the following Sunday at a temple and wait until they were both 18 before running away from home. “Dei Vaithi”, I cautioned him, “all this is too much. You have to be careful. Otherwise…”

“Poda”, he cut me off, “nobody would know. In any case, we have to wait until we’re both majors. And that won’t be for another two years.”

It was easy for me to find Sharada’s father. He ran the mess opposite the Pillayar temple. That evening when I told him about his daughter’s plan for the following Sunday, he let me off without paying for my dosai and coffee. I don’t really know what happened to Sharada after that. But the next time I saw her was about 7 years later when she came to her mother’s house six months pregnant with her first child.

“We must leave before it gets too dark”, Vaithi said getting up, “we have a long journey back. And we have some last minute shopping to do.” He invited me to come visit him in America. And I told him that I’ve already started buying lottery tickets. Before he left that evening, he thrust 500 rupees in my hand. He said he had not had any time for gifts and that I should buy the children something with it. I gave it away it to an orphanage the next day.
at May 09, 2009 10 comments:

I am ten years old and being sent away to spend my summer holidays with an aunt in Bombay. Somewhere in my luggage are 5 or 6 packets of Britania Milk Biscuits. My aunt has specifically requested for them. Milk Bikis are not yet available in Bombay and somehow Parle G is not quite the same. It's a long train journey and it takes all my will power to keep from me raiding the bag. But by the time we reach Pune, I can no longer resist the call of Milk Bikis. To hell with it, I think to myself, I'll just tell her the railway rats got it. I grab the bag I know contains the packets and plunge my hand into it. But inside I find a smaller cloth bag. And this one has its mouth sewn shut. The witch! I dare not rip the bag open because that would be a step too far. Instead I sulk to a corner seat and hope that I will at least get some crumbs.

It's been two days since we arrived. The biscuits have disappeared into the kitchen. But I have a good idea where they may be kept hidden. The afternoons stretch interminably and there's only one thing to do. I wait until I hear the snores from the bedroom and tiptoe to the kitchen. The shelves are groaning under the weight of dalda tins and grime-stained plastic boxes. I feel like a child in a sweet shop. Heck, I am a child and so on. I must make a quick move. I wildly grab the first box I see. Some kind of flour speckled with scurrying insects. The next few boxes reveal a variety of wildlife with random cooking ingredients thrown in. But I strike lucky by the time I reach the top shelf. I cautionary shake of the box reveals an unmistakable thud-thud. I open to find a half-eaten pack of my beloved Milk Biscuits. I hear movement outside. I have to hurry. I snatch a couple of biscuits, shove them into my skirt pocket, replace the box and saunter out of the kitchen casually.

Just having a drink of water, I call out to no one in particular, and now going to the toilet. I bolt the toilet door secure and reach for my stash of booty. Tears spring to my eyes and I muffle the scream of joy that threatens to escape my mouth at the sight of the biscuits. I sink my teeth into a small corner. And in that instant, the rest of the world falls away. It's just me and the biscuit. I want to savour this experience for as long as possible. But someone outside is wondering what's taking me so long. Reluctantly, I shove the biscuits into my mouth, chomping on them as quickly as possible. It's all a bit too rushed for my liking. But I cannot risk being found out. Tomorrow afternoon, I promise myself, tomorrow.