I must have been six or seven when I became aware that people travelled between countries fairly regularly. The realisation must have been triggered by an uncle’s return after a trip abroad and much fuss being made of his jaunt. No one ever called it abroad back then. It was always ‘Foreign’. Someone who had crossed the national border was ‘Foreign-returned’ and this was not an accolade easily earned. Foreign was this mysterious land that would only allow access to the special ones among us. It was a land populated by chosen people and to have been amongst them and breathed in the same air as them was a rare privilege only a few ever managed.

I can still recall the smell of the luggage that accompanied an uncle’s family after they returned from Foreign. It was smooth, fresh and nothing like the pungent odours of our crowded household. It smelt of clean, white people. A race far removed from the plagues of us dark-skinned beings. Foreign back then was synonymous with any place where white people lived - a cousin’s wife who lived in Kenya once complained to me that despite living abroad she didn’t feel as if she lived in Foreign as there were not enough Caucasian faces around.

I fully expected the Foreign-returned to possess special powers. May be they could levitate. Or turn water to oil. They had to have something extra about them. And yet to me they looked remarkably normal, almost predictably familiar. How could that be? How did they negotiate their way around Foreign land looking and talking the way they did? How did they communicate to the Foreigners if they needed water, shelter or clothing (never mind the fact that being in their land would make our people foreigners)? How did they manage this magnificent feat by appearing so utterly human?

My confusion was further confounded when at the age of 10 or so an aunt read my palm and proclaimed that I had Foreign raasi. It was predestined that I was to go abroad. I wondered if it was the curved line on my palm that resembled an airplane’s tail that gave her the idea and thought it best not to ask in case she changed her mind. And sure enough, some years later I had such an opportunity – and it was to a country with a majority Caucasian population to merit the Foreign status. My return some months later was greeted with great enthusiasm. I was asked how I felt now that I’d seen Foreign. It was my Neil Armstrong moment. And I milked it. I carried my jet lag around with pride and felt a sense of loss as my body clock returned to the local time. I would find casual ways of introducing the fact that I’d been to Foreign into conversations. I felt a unique bond with anyone else who’d left the country ever. We were the chosen ones, the Foreign-returned.

These days however, Foreign travel is much more common and does not hold the same kind of mystery like it once did. I have lived in Foreign for nearly a decade now and this fact no longer registers with me. Everything around me is in sharp focus while Foreign is a fuzzy place where everyone moves in slow motion and the air is forever scented with lavender.

Soon I am to become a Foreigner (or should it be that I now give up being a Foreigner and become a local?). I wonder if there's a line on my palm that could have predicted that. 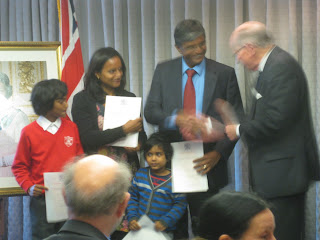 I am no longer hysterical like I was when the letter came through the post a few weeks ago. "But this can’t be right", I wailed dramatically to my friends, "I don’t look British. My dark skin belies the pale English sun." I was distraught when our application for taking up British nationality was approved. Suddenly, I felt like I had sided with the colonial oppressors as portrayed in Tamil movies and had earned the technicolour wrath of all our movie heroes who played freedom fighters.
Mine was not a reaction I had foreseen. After all, I was the one who had pushed for naturalisation in the first place. I wanted to travel around more and getting a visa each time we needed to leaves these shores was a nightmare. A British passport would open doors more readily for us and it seemed the obvious thing to do.
And yet, when the reality of becoming a British citizen and what we would have to do in order to be formally included sunk in, I became agitated. First, to become a British national, I would have to surrender my Indian passport. Indian citizenship is like a monogamous relationship that demands exclusivity from you. However, it’s a polyamourous relationship if I had a British passport at birth. I could be a citizen of any other country while still pledging my allegiance to the Queen. Next, becoming a naturalised Briton meant a tacit acceptance of something a little more uncomfortable to come to terms with. That was now home.
There are many things I love about living in this country. There is a refreshing lack of sacred cows. Nothing is beyond gentle ribbing. At the height of the royal wedding extravaganza, there was a comic on tv who remarked if a mere wedding could generate such a lot of global interest, imagine how popular a public hanging of the would be. I cannot imagine that sort of a remark being made about Periyaar or that holier than holy cow Ambedkar. No one got offended or sent out a Public Interest Litigation. It barely caused a ripple.
I’m forever amused by British fascination and irreverence for an archaic and anachronistic institution such as the monarchy, its love for self-deprecation, its maddeningly polite demeanour (I once saw a lady thank a cash machine), its ridiculous obsession with its gardens. There are several things that would be a parody were it not so real. And yet, it is in this over-regulated country that I have been my most comfortable. I am not worried about what other people think and can simply get on with my life. I don’t feel vulnerable or threatened or feel the weight of oppressive tradition dictating my life. I could wear what I please and pretty much go where I wanted without a thousand questions being raised. This place simply lets me be. And what a blessed relief that has been.
So getting a red passport would seem like a natural step in the direction. Yet, somewhere deep within it feels like treason. And I sense a billion pair of eyes boring down on me.
(to be continued…)
p.s. I have used 'citizenship' and 'nationality' interchangably'. Please don't get technical on me.

p.p.s. These are personal observations and if there is to be any argument, I would appreciate if it is not allowed to degenrate. Thank you!
at September 24, 2011 7 comments:

A Clerihew is a whimsical biographical 4-line poem. Its rhyme structure is AABB and is often quite contrived. Like this one made up by the eponymous Mr Clerihew Himself.


Sir Christopher Wren
Said, "I am going to dine with some men.
If anyone calls
Say I am designing St. Paul's."
And here's one I made up earlier.


If Anna Hazare were a cook
Who wrote a recipe book,
It would be empty for pages
And suggest you fast for ages.


So that's your challenge. Come up with a Clerihew about anyone you please. And post your entry in the comment box. I'll give it a couple of weeks and then announce a winner. Off you go!
at September 20, 2011 18 comments:

Email ThisBlogThis!Share to TwitterShare to FacebookShare to Pinterest
Labels: competitions

I had lost my interest in blogging and never picked it up again. But recently I have been wondering about posting competitions on this blog like I once used to.

So starting very soon, there will be a few contests to liven up this space. Be on the look out.
at September 12, 2011 8 comments: