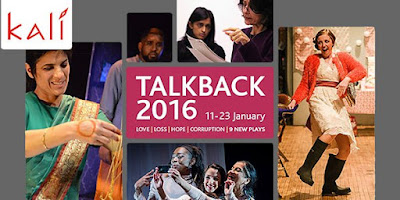 Last year, under the banner of Kali Theatre company, I attended a series of playwrighting workshops with established theatre directors and playwrights. I then submitted my own draft of a play. Following a brilliant feedback from two RADA trained performers, the play was selected for rehearsed reading in London this year.

Since its selection, I have attended one half-a-day's workshop with actors and a director. I tweaked my script even further before submitting it one last time. I have a day's rehearsal this Wednesday and the reading is on Friday the 15th of January. Details on where and how to book tickets may be found on the side bar of this page

It is giddying creating people and making them say things you like and just as easily, kill them off. At the rehearsals, it was remarkable seeing characters that had lived disembodied in my head suddenly be transformed by actors who charged the words with emotions and gave their actions a motive.

I approach it with a mix of trepidation and excitement. If you are at loose ends in Central London on the 15th of January, 2016 it would be great if you could come along. It would mean a lot to this aspiring playwright. Thank you!