Year ago, when I was working in a very cool Music Television station in Mumbai, my boss urged me to include references to bindhi and mehndi in the links that I used to write for the VJs to read from the teleprompter before they cut to a song. "They are all the rage", said my boss. I was baffled and couldn't comprehend how something that we had always done in India had suddenly become all the rage. And how my seriously Indo-phobic boss (and colleagues) was suddenly so smitten by these very Indian symbols. Then it dawned on me.

Madonna had just released Frozen music video in which she can be seen wearing a pottu on her forehead and henna on her hands. The rage that my boss was referring to was in America where I was told everyone was now copying the Indians. And therefore, what we had always done had suddenly gained legitimacy and validity and copyability. So, for anything to be worth emulating, it had to be sanctioned first by America and then we could all follow.

I was reminded of the aforementioned incident after I read about a young Indian actress who, following after the Harvey Weinstein allegations, had now come forward with accusations of sex assault by a Hindi film director. Even the headlines referred to the American movie producer as if it was a precedent he had set for us all to now follow. What would have been dismissed as regular 'casting couch' in the past, has now gained some legitimacy because someone in America has blown a whistle.

Surely this actress can not be the only one to have been assaulted. In an industry that venerates its men and denigrates its women almost as a rule, such occurence must be common place. But let's say more women come forward with their allegations - ignoring for a moment the very real possibility that if they did come forward, they risk serious threats to their lives from the star's fans - what would we as fans do?

What if we find out that our most favourite star was also a sex pest? Would we still love and adore his movies? Would we be shocked and vow never to watch any of his movies ever again? Or would we be able to separate the man from his movies? 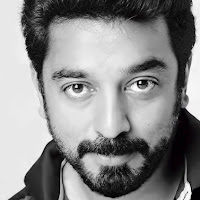 Meanwhile, I am trying to write something called My Dear Kamalahasan. What would you expect to see if you heard that title? Throw some ideas.

If you are reading, lurking, then now would be good time to comment and share your thoughts. Thank you!
at November 20, 2017 No comments:

There was no trace of self-pity in her narration. My friend who I was meeting after 27 years was telling me her life story, the sequence of events that led to a tragedy, her own discovery of it and its inescapable aftermath and yet, not once did I hear her wonder why it had happened to her. Couldn't she have been spared? What had she done to deserve this? There was none of that slippery slope of bitterness.

What there was, was enormous sadness. Despite her best efforts a rogue tear escaped and trickled down her cheek. I sensed a resounding bulk of grief that seemed to choke at the throat and in its rawness, must have chafed at skin and worn her limbs down. Yet there was an unquestioning acceptance of the card that she had been dealt with and perhaps it was this acceptance that had helped her keep a lightness of touch. And absolute grace. As I reacquainted myself with my old friend, I learnt that her personal devastation had, rather remarkably led to something else. Something that has her radiating in happiness these days.

I cannot say I knew my friend that well when we were young. But I am awestruck by the person she has evolved into. And in the short hours of her stay here, she managed to leave the gold dust of her presence here. Something for me to savour in the days to come.
at November 07, 2017 No comments: