Over the weekend, Shoefiend and I took part in an 8km run. I wanted to finish in under an hour. I did it with 7 minutes to spare. The results may be found here. We had great fun running and I thought wouldn't it be better if we could get more women jogging and logging their runs and sharing their successes and inspiring others to do the same?

So I've gone ahead and started Running Ranis. A sisterhood for runners. A place where you can come for encouragement, advice or simply a kick up the rear. Send me something about your run - maybe a race you're planning to enter or a review of a training bra you've recently bought. If it is about running, then I want to hear about it. Send in your photos too. Send them all to ammania@gmail.com and I will upload them on the blog. Ready, steady, Ranis!
at September 27, 2009 10 comments:

Not everyone wakes up in the morning, excited about going to work. Fewer still get to do that for fifty years. How lucky are you, Appa! That not only do you love your work but you get to practice it for over half-a-century. The funny thing is, you never aspired to become a lawyer. You had applied to study medicine along with four of your friends. While they received a call for interview, you didn't. You were heartbroken and consoled yourself that it was not meant to be. And it was your father and uncle who persuaded you to take up law as an alternative.

Did you even think back then that one day you would be celebrating your golden jubilee in a profession that you only took up as a consolatory choice?

But having resigned yourself to the choice, you threw yourself wholeheartedly into work. Sure you had your father and uncle before you to help get a head start in the profession. They were already established lawyers and you never had to struggle the way other newbies did. That said, how you took the baton and ran with it is entirely to your credit. You have never compromised on your integrity and you have worked tirelessly to get to where you are today. Even now, you rarely take a holiday and your spare hours are spent in the library reading up on legal matters.

I admit there were times when I wished you worked in an office like other fathers I knew. Those who worked fixed hours and took their families around the country on vacations on LTC. Granted that would have meant monthly paychecks and retirement at 60. And you could not have supported a large and rambling family the way you uncomplainingly did or carried on working for as long as you have. But working for someone else might have meant being with your wife and children more instead of putting in 14-hour work days all year round. Retirement might have meant taking time to enjoy your grandchildren instead of fitting them around client meetings and court hearings.

I see you bustling about in the mornings as you get ready for work. Answering phone calls, packing your briefcase, calling out to juniors, slipping on your black coat and rushing off to court because your case is about to be called. And deep down I know that you are never more happy than when you are working.

Fifty years in a career that you love and that has rewarded you in more ways than one can recount. And what's more, you aren't done yet.

Congratulations, Appa! We are immensely proud of you. 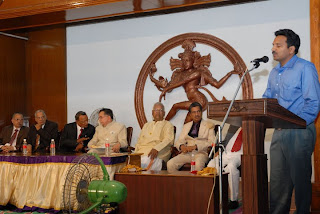