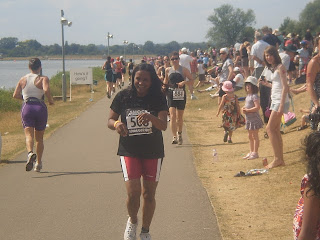 It was as if all the drama had been exhausted in the first two legs that my running laps were delightfully devoid of any. By now I was resigned to the fact that I was indeed going to be bringing up the rear end of our group, so there were few surprises. But each time I spotted a fellow 500-numbered vest, I quickened my pace. Sadly, the 500s had all but gone and despondency weighed my legs down to a slow plod. Only the sight of my motley group of cheerleaders (husband, son, friends and their kids), lifted the spirits. As I turned in to go for the last lap, I promised them that I'd be back very soon.

But with over a kilometre left to go, I was overcome with inexplicable lethargy. Even the sight of the finish line in the distance did nothing to spur me on. I will finish in my own time, my mind seemed convinced. And I went back to a slow jog. Until I heard someone gaining ground on me. Funny that I could isolate a particular footfall among several hundreds. It grew louder as she drew closer. Soon, she was running alongside me and it was only when she was a few paces in front that I saw what was on her vest - 500-something! She was in my group and she had clocked me. She didn't want to end up last and was racing ahead of me. But I couldn't continue plodding and let her overtake.

The next few minutes saw me digging deep into the last reserves of energy as I willed myself to surge ahead. I ran in a blinding roar. I didn't care anymore. This was all there was to it and nothing more. I called out to the husband to join me in a last dash. And he sprinted along. Finally, there it was, the finish line. I crossed it and that was when I realised - I had been smiling all along.

So proud of you, way to go :) Congratulations and thank you for all the inspiring four posts on this Triathlon.

oh man, what a treat of a blog after months ...
beautiful, honest and inspiring!

Its not just about the destination, but the path too.Looks like you enjoyed yours. Congrats.

Sounds like it was an amazing event and also very inspiring.