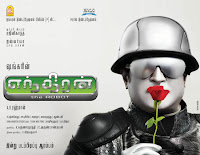 I watched Endhiran-Robot the other day and came away feeling exhausted. The relentless assault of grandeur and hyperbole for close to three hours had left me completely spent. There was nothing subtle or understated about the movie. Everything was exaggerated several times over to make a point. It wasn't enough to make the eponymous robot fly. He had to leap and swoop and be incomparably aerodynamic. The lead actress couldn't just be pretty. She had to be world class. The songs couldn't have been shot in any old mountain top. It had to be set against the stunning backdrop of Macchu Picchu. About ten minutes into the movie, I got used to such pointless display of excess. And learnt not to expect anything remotely resembling simple or straightforward.

The story is a familiar tale of Frankenstein's monster in which Rajinikanth's Dr. Vaseegaran creates a robot in his own image which turns evil and goes for world domination. Along the way, the robot terrorises spectacularly, romances the lead actress away from his creator and generally makes a mess of the milling human beings around him.

Rest of the characters seemed irrelevant and even uncomfortable in a movie that was rather pre-occupied with its own growing opulence. So I didn't flinch when the bafflingly mismatched lead couple declare their undying love for each other along the sandy dunes of some exotic location. I took it in my stride when the heroine talks about the care home she had set up and one which housed a bunch of perennially smiling women who appeared as if they had been on a diet of anti-depressants and cartoon network. And it didn't bother me one bit when the robot goes on a riotous rampage in the climax. I had long ceased to care. Ah, they could always be rescued by some clever swish of the special effects wand, I reckoned.

Endhiran was a movie where everything was way too much. But even that seemed insufficient.
at October 29, 2010

Email ThisBlogThis!Share to TwitterShare to FacebookShare to Pinterest
Labels: endhiran

Summarised to a T. I found it a bit too much and after the first few minutes, started ignoring the opulence and starting finding all the glaring holes in the plot (what little there was in that excuse of a plot) and movie.

Went with a Rajni fan who decided its time 'thalaivar' spent his time in dignified retirement!

witty and sensible review, a rare one, for Endhiran. I was fed up of reading overload about the hero...

Your review is just right.

Not seen it yet
But get the feel...

good post. And that display of grandeur is what i liked a lot.

what else did you expect?!!! the film doesn't pretend to be a humble documentary true to anything in real life.

something that would respect the audiences intelligence would be preferable, no?