I first noticed it when Sivaji Ganesan passed away. As someone born in the 70s, much of my growing years was marked by the rituals of Sunday evening Tamizh cinema and Friday night Oliyum Oliyum. And Sivaji Ganesan was a permanent fixture in them. Anyone who was melodramatic was a 'Sivaji' and rhymes like 'Sivaji vayile jilebi' were very much part of our book of nonsense rhymes.

So much so, I remember being fourteen and being part of the school drama team enacting a popular scene from Sivaji's Thiruvilayadal. It was a plum role that we all vied to play. Sivaji played Lord Shiva in the movie and in our minds, he might as well have been immortal. So years later, when news broke that he had died, I was in utter shock. Heck, I was not even a fan. Apart from Motor Sundaram Pillai and more recently, Thevar Magan, in every one of his movies, I felt Sivaji had outacted the entire cast. As if to tell the producers, you've paid me a lot, so let me give you your money's worth of acting. That said, I could not help feel a deep sense of loss that he was no more.

I wrote an email to the rest of the extended family (we were all still talking to each other then - long story) asking them to recount their favourite Sivaji moment. It was a way of sharing our collective grief. Each one came back with a story, a song, a tenuous link. We were mourning our own lives, our own youth and childhood which would never return. These people had been the bedrock of our growing up years. Towering flag poles upon which we festooned our own buntings and now they had been felled.

It happened again and again in the coming years. With M S Subbulakshmi, RK Narayan, Gemini Ganesan and more recently, with Jayalalitha. I find that we immediately scramble our brains to find an incident or an association with the deceased and write about it. Some of the pieces that I have read in the past couple of days have done it quite effectively. I have come across some very touching tributes and because it too soon for it, they all seem to omit some colossal pitfalls in the administration and chosen instead to write encomiums. And here's the thing about it, almost all of them are about the writer. Although it is ostensibly a eulogy, it is much more about their own lives that was enriched by association (however long-winded) rather than about the recently departed. As if to grieve the loss of years of their lives they will never again see.

About Jayalalitha, I cannot say I was a fan. Of her acting, I didn't think much and of her administration, I knew very little. I do remember feeling nauseated by the sight of vulgar display of wealth when her adopted son got married and rage when a few dozen were crushed to death in the security cordon when she visited Kumbakonam to take part in the Mahamagam festival to mark her birthday. That said, I did think she was formidable. And the sight of grown men falling at her feet was at once revolting and amusing. With so few women in leadership roles, the few that I got to see, however flawed, were inspiring. 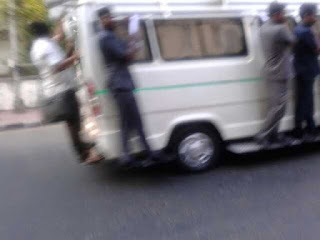 As for my brief Jaya moment, here's a photo I took of her convoy the last time I was in Madras. Word was out that Amma's entourage was going to be passing through and the streets had been swept clean, hours ahead of her arrival.

Some six hours after the first notice, a wail of sirens from a series of vehicles was followed by a large white van with security personnel hanging from it.

And inside it sat a woman with her palms folded in 'Vanakkam'. I was chided by a waiting police woman for taking a photo without permission. I am British, I replied, I am not bound by your arbitrary rules and she looked at me as if to say, 'If you are British then I am the Chief Minister of Tamilnadu'.
at December 08, 2016