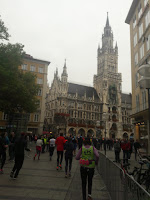 I was running to raise funds to replace the asbestos roof at my school in India. If you wish to contribute, you can do so here - https://www.justgiving.com/crowdfunding/abhiarumbakkam
at October 28, 2017