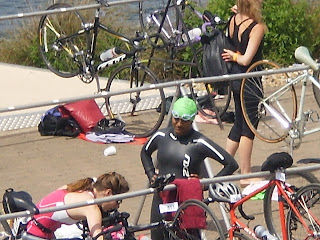 The most telling moment of my Triathlon challenge occurred right at the beginning when I was still racking my bike on the allotted spot. A couple of bikes from me was a lady with short cropped hair trying to zip her wetsuit up. Earlier I'd assumed that wetsuits were banned by the organisers because the water temperature was over 22 degrees (the maximum allowed temperature for wearing one). So when I approached her and asked her about it, she pointed to her chest and told me that because of her 'special condition', she would have to wear a wetsuit but clarified that it was indeed allowed for other competitors to wear one too.

It was then that I noticed her chest. Her left breast was flat where once there must have been a mound. It was probably the look on my face. 'I was diagnosed with cancer in 2008', she volunteered, 'and underwent a surgery a few months ago to remove it. This is my first race this season. I have to be careful where they operated on me'. She had been racing regularly before her diagnosis and had been completing the circuit in an astonishing 1 hour and 16 minutes. Training for the race was the only thing that kept her going through all those rough months of aggressive treatment. This time she was racing for herself, she asserted before wishing me luck on my maiden tri attempt.

As I went back to squeezing my bulk inside a wet suit, I reflected on the fact that we were both about the same age. And how being relatively young or reasonably fit (or highly so, in her case) was no guarantee against any virulent illness. And to be there that day, that moment, to be given such an opportunity, to have the health and circumstances that permitted participation and to not be timid about seizing it were about the only certainties. Indeed, how blessed was I to have so many fickle situations stacked in my favour!

With those lingering thoughts, I bunched up my hair, pulled down my swimming cap, snapped on the goggles and got ready for what was to be my most daunting challenge yet.