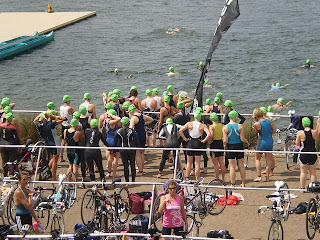 I attempted my first open water swim back in March. I had been doing a fair number of laps at our local pool and reckoned that swimming in a lake would be no different. What I didn't know then was that open water swimming was similar to regular swimming in the same way as cycling was to boxing. A completely different kettle of fish! A realisation that dawned on me as I lowered myself into the freezing waters that cold, cold spring morning. But having ventured into the lake, I was not about to get out without giving it a proper go. Within seconds of being in the water, my limbs had grown stiff and my valiant attempts at breast stroke succeeded in moving me a few pitiful metres ahead.

I was now in deep waters of depth unknown and had to keep moving ahead as there was nowhere to pull up. But by now, there was no way of getting back and I had to necessarily complete the lap swimming. The last leg was sheer terror as I had to swim at least 150 metres non-stop and my arms were starting to hurt quite badly. With 60 metres to go, I started to panic and called out to other swimmers to come to my rescue. I must have cut a pathetic figure as I cried out for help. But my reputation was the last thing on my mind as I desperately sought to swat away a slide show of strategic images from my eventful if, tragically short life. Never again, I swore as I peeled off the wretched wetsuit, not if my life depended on it (which it might well have, that morning).

Some weeks later, a chance conversation with another mum from my son's school alerted me to the fact that a dad from the school had done an Iron Man challenge. He too had been battling similar fears earlier and had successfully overcome them. Richard's son and mine were classmates and I only knew him by sight. That afternoon I went up to him, introduced myself and regaled him with my disastrous first attempt at an open water swim. He volunteered to help me out and told me he'd pass on tips from the sports psychologist he'd visited when he'd been panic-stricken. We decided that the following Saturday was as good a day as any and that he'd pick me up from my door at 6.30 in the morning. But by Friday evening, I had lost my nerve and following a sleepless night, I rang him early on Saturday morning and canceled the swim. He was very understanding over the phone and we rescheduled for the next Thursday. He hung up with a polite threat that he'd drag me out of the house if that was the only way to get me to the lake.

A few mornings later, with the reassuring presence of my new training partner, I was able to overcome my an initial bout of hyperventilation and begin swimming. Tentatively at first but more firmly and comfortably soon. Breast stroke gave way to front crawl and I was infinitely more comfortable gliding along the surface. Week after week, Richard would increase my swim distance. By the end of the month, I was doing three laps non-stop where previously I'd struggled to get off the starting block.

On race day, as we lined up to get into the seemingly endless stretch of water, I found myself recalling what my son had told me earlier that morning. He'd wished me luck and told me that he hoped that I wouldn't drown in the lake. I smiled at the memory because I knew that was never going to happen.

The water was cool and welcoming. The race was about get underway in less than 5 minutes. We were given our instructions and there was nothing more I could do except start swimming. The horn went off and I was away with the crowds. I finished the 400m in 11 minutes and raced to the transition area to strip away the wetsuit and get into my cycling gear.

At that time, I thought the toughest was behind me. Who could have known that cycling would be such hard work?

:) Nice story. I am struggling to learn how to swim in a pool and somehow reassuring to see how you managed to overcome your fear.