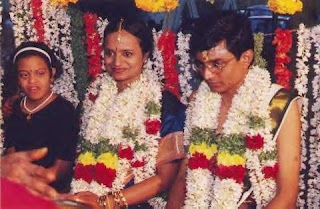 Best wishes to the both of you. Love or arranged, a marriage is a marriage in the long run, either it works, or it doesn't. :)

Happy Birthday Sriram! Hope you celebrated with a beer in hand parked on your very comfy sofas!

what a beautiful post. Love the way you have portraited the man. Happy b'day to him.

Hi ammani,
Why have u stopped blogging regularly? Miss your posts.

And yes,that was a lovely way of putting down your love for each other.

That was a lovely tribute to love :-)

I vibe with you in so many ways..and I hope me and my hubby of 1 year grow as close as you and your husband have become!

Ammani... Missed you every singled day I logged in! But I guess my wait was well worth.
Wish your Ram and you wonderful and loooong years of togetherness!
Growing old together is the best thing that can happen to couples.
Regards

Happy belated birthday to your Man! Wishing you both many more years of love, happiness & togetherness!

Thank you everyone for your really wonderful comments. It is touching to be told that there are some who actually miss my drivel.
There's plenty happening in real life that I seem to have fallen out of rhythm with this blog. But I will resume posting more regularly some time soon. Thank you!

wow - lucky man! such good words, down to earth and highly romantic at the same time!

How beautiful! Cheers to a wonderful couple and belated birthday wishes to your husband!

I was taken aback at reading what seemed like my own life's story. I too had to get married at 26, since until then I could never seem to find the right person - much to my parents' and relatives dismay.
Now, 4 years later - every single day, I thank destiny for bringing us together.
God bless you and Ramu