A Full Year In Germany

Normally we coast along for a few minutes conversing like this before invariably hitting a technical snag word like 'leakage' or 'confirmation'. And then I have to begin apologising again for my lack of fluency in German before beginning the arduous task of explaining the whole thing. This usually involves breaking the problem down into small words like water, fall, little by little and bathroom before I succumb and say it again in English slowly and loudly. And somehow hope that the volume and pace of my English would make a difference to her comprehension. At times it works, often it doesn't.

On my good days I resolve to get better at German but on those days when I long for some simplicity and don't want to feel like I am wading through a sea of bafflement and incomprehension, I curse this place and all its people. Bloody Germans! With a language so complicated that few countries in the world dare speak it.

Have you had the joy of interacting with a German noun? They are staggeringly long, often made up of smaller words and have a gender. They are like a group of children who have climbed on top of each other to form a pyramid of some sort and then covered themselves up with a cloak and given themselves a mask and demand that you call them by a neutral gender. You want to give them a clip around the ears, ask them to quit horsing around and behave. The nouns are most silly! 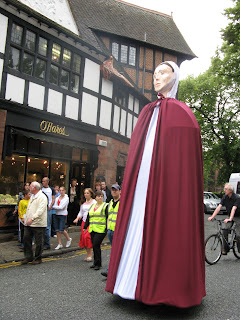 Yes, it is hard but I have to be grateful to be given an opportunity to be challenged as an adult. Bizarrely enough, we never once thought to visit Germany earlier, always choosing to go holidaying in its neighbouring countries instead. Yet it's only upon living here, that my family and I see how beautiful this country is. We live in a stunning part of the world and on clear days, can see the Alps from near our house. It's also a very affluent region with plenty of nature and good food to offer. We experience distinct seasons through the year and live within driving distance of some of the best ski slopes in Western Europe. And yet there are days when I long to just be understood without needing to say, 'wie, bitte?' time and time again.

Perhaps it is in my nature to not be content with my lot but to constantly yearn for something else. That said, on those days when I do successfully manage to communicate or understand what is being said without needing to google translate or look up the dictionary, I am overcome with a genuine sense of achievement. I find myself picking up German books to read and actually managing to understand parts of it - I deliberately choose books in those subjects which I don't understand in the first place. This way, in case I don't understand something, I can just say, 'never got the point of management books. So much jargon!'

It has been a year of enormous learning. My children have adapted to this country way better than I have as I constantly fear transgressing some immutable, invisible social norm and be told off by some stern German person (as it happened early on when sneezing on the underground train made someone tell us that we were "disgusting"). It still feels very alien and have yet to find the warmth and the feeling of 'at homeness' that I found instantly in Britain. I miss the easy access to culture and art that I so took for granted while in Britain and find the provincial attitude of several Germans many of whom live and work not far from where they grew up, incomprehensible.

As an expat I live in a bubble and little idea of what is going on in the local area. Listening to the news, I can gather snippets of what is going on but then find myself going on the Guardian or the BBC to gather more detail. So this is how it is. There are days when I am awestruck by this place and days when I find it small and stifling and cannot bear to remain. It is pretty but dull. Pretty dull, pretty boring, pretty cold. But where do I go? With each passing year, the places I come from and where I have lived recede further and further that I had better unpack my bags and plan to stay here for a while. Willkommen in Deutschland.
at August 30, 2017